COVID-19 widespread testing is crucial to fighting the pandemic, but is there enough testing? The answer is in the positivity rates.

He started planning a six-day cross-country driving trip with his wife and Bernese Mountain dog to visit his elderly parents. His 91-year-old father was just discharged after four months without visitors at a Veterans Administration hospital, where he was treated for a bone infection. His mother, 83, has diabetes, survived several strokes and heart attacks and is at high risk of COVID-19.

They arrived in White Plains, New York, Tuesday night. As he traveled across the U.S., Subit kept an eye on Washington’s COVID-19 rate and case count to make sure it didn’t go back on New York’s list of more than 30 states whose residents have to quarantine for 14 days if they visit. They drove through Montana about the time it hit New York’s list, and they passed through many other states already on it, including Idaho and Indiana. New York doesn’t count a state unless you spend 24 hours in it.

Know before you go: These states require travelers to self-quarantine or present negative COVID-19 test

Many states in the Northeast, where COVID-19 hit hardest early in the pandemic, have the same restrictions as the Big Apple. If Subit’s parents were in Maine, however, he could have planned his trip sooner if he was tested within 72 hours of arriving and quarantined until he got negative results.

Sound confusing? It is. But states’ divergent views on COVID-19 risks, the role of testing and the need for quarantine underscores the disagreement among experts and how little is known about the virus.

The already confusing patchwork of state regulations was further confounded by guideline changes last week from the U.S. Centers for Disease Control and Prevention. The CDC first said people exposed to a probable or confirmed COVID-19 patient who don’t exhibit symptoms “do not necessarily need a test.”

Then, CDC Director Robert Redfield tried to clarify the change by saying, “Everyone who needs a COVID-19 test can get a test.”

“Everyone who wants a test does not necessarily need a test; the key is to engage the needed public health community in the decision with the appropriate follow-up action,” he said.

So what’s a person – especially a traveling one – to do? Here are some answers.

Should I get tested?

Maybe. Most public health experts agree the priority should be on testing people who have symptoms or have been in close contact with a person who has tested positive, and some states require travelers to present a negative test. Former CDC epidemiologist and geneticist Dr. Sonja Rasmussen, a University of Florida pediatrics professor, said the testing must be done quickly so those who are positive can be isolated and their contacts notified so they too can quarantine.

Returning from overseas or out of state? The CDC removes its 14-day quarantine recommendation, but some states still have them

“This is the way that other countries have controlled COVID-19 spread,” she added.

“Most parts of the country are in the double digits, so we’re nowhere near doing sufficient testing,” she said.

Where should I get tested?

“You want to go somewhere where they can explain in language you understand the terms ‘sensitivity’ and ‘specificity,'” said Dr. Nirav Shah, former New York health commissioner, now a Stanford University senior scholar. That means they can tell you how likely you are “to truly have COVID with a positive test, and how likely you are to be COVID-free with a negative test,” he said.

Use a place that can promise results within a day or two.

“Less than 24 hours would be best,” Rassmussen said. “If it takes five days for test results to come back, the contacts of that person have been out in the community exposing other people. That’s how a small outbreak can turn into a big one.”

What test should I get?

If a negative test is required by a school, state or other place you’re visiting, the type of test will probably be specified.

There isn’t a single test everyone agrees upon, Shah said. Molecular tests, such as RT-PCR tests, detect the virus’s genetic material and are generally more reliable than rapid antigen tests that pick up specific proteins on the surface of the virus. But neither is infallible.

When it comes to testing, Shah said, “the devil’s in the details.” That’s because there are significant differences between types of molecular or antigen tests, specimen handling, how much weight can be given to positive or negative results and when results come back.

What should I pay for a test?

Costs vary widely based on the type of test, which often dictates how fast you get results. Insurance companies are supposed to cover tests without cost sharing, but the big caveat is they have to be “medically necessary.” That should include anyone with symptoms, who was exposed or who is having a medical treatment.

Tests can cost as little as $40 or more than $150. If you’re paying out of pocket, factor in the cost, the turnaround time, the test’s reliability and how likely it is you were exposed.

If you’re taking the test only for “peace of mind,” Rassmussen said, it doesn’t make sense with today’s limited testing.

“You could test negative today but test positive tomorrow – the peace of mind offered by a single test is limited,” she said.

I tested negative. Why do I have to quarantine?

People who have been in close contact with a person who tested positive need to quarantine for 14 days after their last exposure, regardless of their test results, according to the CDC. It can take days after exposure or symptoms for the virus to be detected by a test, so even if you test negative, it might not show up on a test until later in the 14-day period, Rassmussen said.

The effectiveness of two-week quarantines is about the only thing public health experts agree upon, Shah said. That’s long enough to know whether you have the virus and are contagious.

When it comes to testing, Shah said, “‘effective’ is a term we try not to use.” 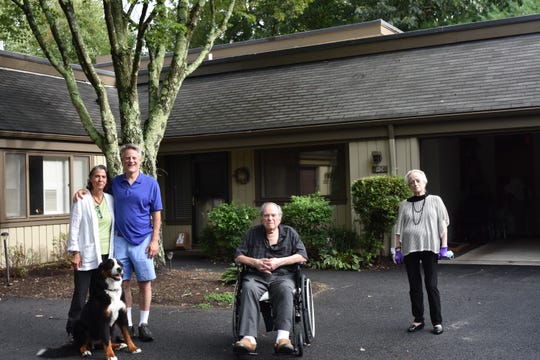 As for Subit, he never got tested because he has sheltered in place, the rate and case counts are very low where he lives near Seattle, and New York wouldn’t care anyway. He also couldn’t afford to take the time off work to both quarantine and still see his long-divorced parents – or to wait any longer. They’d hit snow and not be able to eat outside, and bigger considerations loom.

“My father is going to be 92 in October and the bone infection is ultimately going to be terminal,” Subit said. “There’s a reasonable chance I need to see him before I can safely get on a plane. I hope he’s here next spring, but I don’t know.”