Drawing angels and inspiration; issues of race and political history discussed at the BPL - Ever Travel 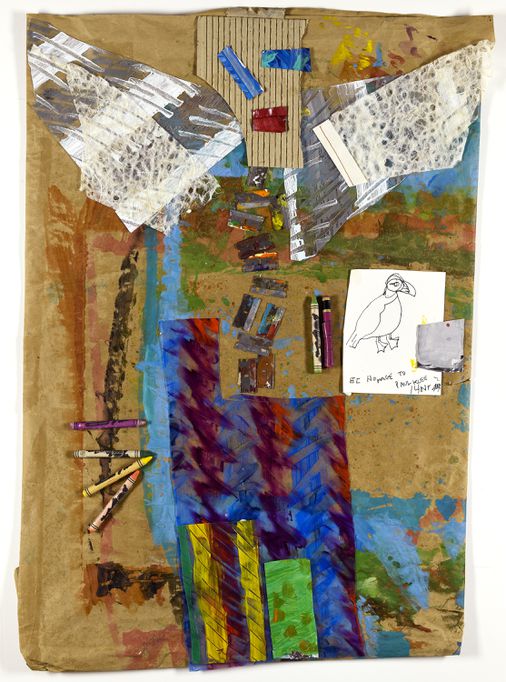 Paul Klee’s angel drawings and prints — some 70 of them he did in his career — use simple lines to show figures serene, playful, contemplative, protective, sometimes sad. Inspired by Klee’s angels, the children’s book artist Eric Carle made a series of 20 angel collages using cardboard, paint, and found objects. These pieces are the subject of a new exhibit at the Eric Carle Museum of Art. “Eric Carle’s Angels: An Homage to Paul Klee” opened to the public last week, and will run trough Nov. 29. Carle started making the collages four years ago, at age 87, using materials that otherwise would’ve been discarded in his studio: shipping boxes, tubes of paint, carpet shreds, aluminum scraps. His angels are colorful, expressive, with scrawly sweeps of color like Cy Twombly, but with a lighter, more playful touch. Wings gesture at sweep, uplift, flight, embrace. The pieces exude a benevolence and showcase a masterful use of color, shape, and energy, a vital series by an artist whose work expands well beyond the pages of children’s books. For more information, visit carlemuseum.org.

Pleasures of the seasons

Eleven paragraphs in Vermont writer Makenna Goodman’s swift and sensual debut novel, “The Shame” (Milkweed), move the reader through the seasons of the Vermont year in a way that is so specific, so alive, so accurately capturing the shifts, the pleasures and frustrations in each, that the experience is like living a full year in fast-forward. “Winter is copulatory. . . . There is little else to do in winter but chop, pile, stir, slide, and lick.” In summer, “we turn a deep honey,” and swat flies, and get exhausted by the fecundity. Goodman’s main character lives off the land with her professor husband and two young children in what seems like bucolic bliss, but Alma narrates her story as she is fleeing her family, and begins to detail an alternate story she’s creating, based on the curated life of New York ceramicist she follows online, and then much further. “Yes, I felt invisible. I didn’t have anything to show for myself except my kids, and the older they got . . . I grew more and more servile, adhering always to their changing needs.” Goodman’s sentences pulse, they are alive, with the mess and ambivalence and artistic ambition and desire for more that saturates Alma’s mind as it asks, with fear: Is this all? Is this enough?

The Boston Public Library is hosting a series of author talks that address issues of race and political history. In partnership with Boston’s Museum of African American History and American Ancestors/NEHGS, on Tuesday, Aug. 11, the BPL will present (virtually) author Gretchen Sorin to discuss her new book “Driving While Black: African American Travel and the Road to Civil Rights” (Liveright), which looks at the way cars allowed Black people to avoid the violence and threats of public transport, the terrifying encounters Black drivers faced on the open road, as well as informal networks and travel guides for Black drivers. Sorin will be in conversation with Kinshasha Holman Conwill, the deputy director of the Smithsonian’s National Museum of African American History and Culture. The book is being made into a PBS documentary by Ric Burns. For more information, and to register for the online event, visit bp.bibliocommons.com/events/.

“The Unreality of Memory” by Elisa Gabbert (FSG Originals)

“Dispatches From the Vanguard: The Global International African Arts Movement Versus Donald J. Trump” edited by Patrick A. Howell (Repeater)

Pick of the week

Kinsey Foreman of the Odyssey Bookshop in South Hadley recommends “Pet” by Akwaeke Emezi (Make Me a World): “Jam lives in a time when all the monsters — the bigots and abusers — have been eradicated by the angels. But then Jam accidentally pulls a being from one of her mother’s paintings. Made of paint and smoke and metal claws, Pet is there to hunt a monster; the monster it hunts is in the house of Jam’s best friend, Redemption. Pet reveals how refusing to believe they exist only creates space for monsters to thrive.”

Nina MacLaughlin is the author of “Wake, Siren.” She can be reached at [email protected].