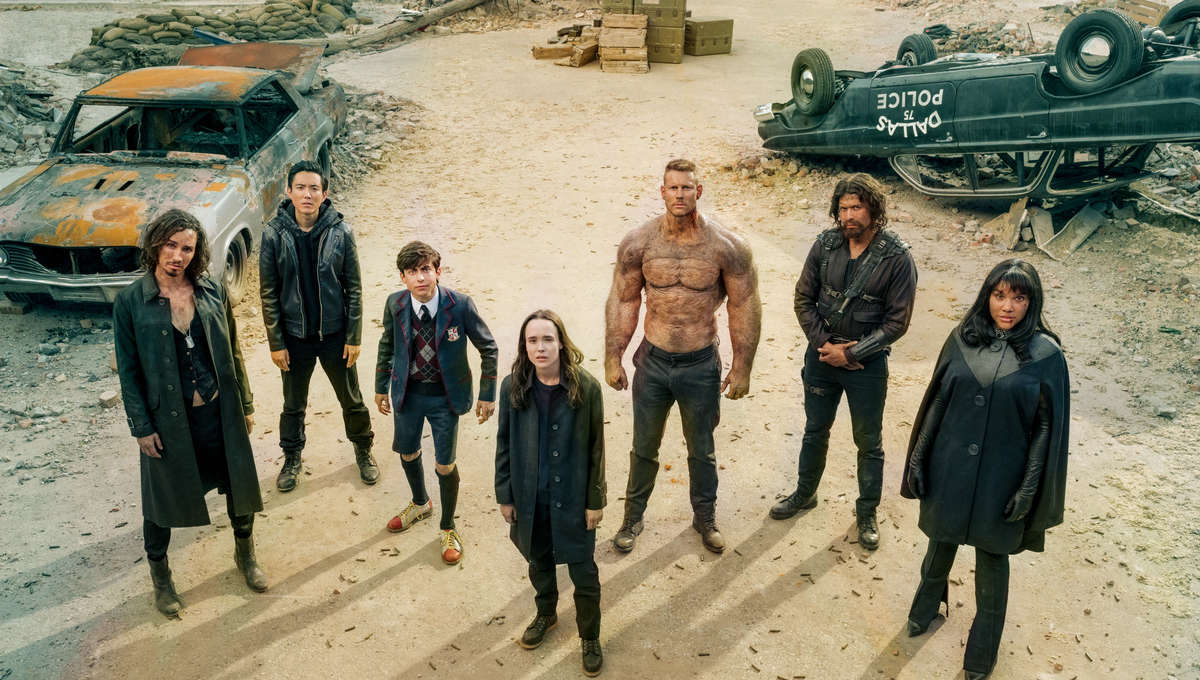 Considering how many conspiracy theories have been generated by the assassination of President John F. Kennedy, it is hardly surprising that this historical event has been a consistent source of movie, television, and book inspiration — particularly for genre. Traveling back in time to stop this death from coming to pass is one such avenue tackled by Stephen King, Quantum Leap, and The Twilight Zone. Other presidents have been murdered while in office, but no one more than Kennedy has prompted this kind of reimagining.

In 2008 and 2009, The Umbrella Academy graphic novel portrayed a version of this time-travel trope in the six-issue “Dallas” series that provides the foundation for the second season of the Netflix TV adaptation. However, there are major changes to the setup and resolution, which see the Hargeeves siblings caught up in one of the 20th century’s most explosive moments. Rather than using this timeline jump to save Kennedy as the audience might expect, it is a Trojan horse that allows an exploration of other important historical events and personal entanglements.

Spoilers for The Umbrella Academy Season 2 finale ahead.

As soon as you see the words “Dallas, Texas 1963,” it is virtually impossible not to conjure an image of Dealey Plaza on that fateful sunny November day. Even though there are seemingly limitless theories and quibbles about what went down, the result is still the same — Kennedy was killed. Thrust from an apocalyptic situation in 2019, Number Five (Aidan Gallagher) saves the day but is immediately thrown into another Doomsday scenario.

Instead of Vanya (Ellen Page) as the bomb, the Soviet nukes “vaporize the world,” or as Five puts it in Episode 3, “it’s a different disease, but … same result.” Arriving in Dallas just before detonation, Five is saved by Hazel (Cameron Britton), who pulls him back 10 days before the end of the world, which also puts him in Dallas before Kennedy’s tragic motorcade.

All the early pieces point to saving Kennedy; however, every Umbrella Academy squad member — except for Diego (David Castañeda) — has alternative pressing concerns, including other significant historical moments that link to personal entanglements. This isn’t to say JFK doesn’t factor throughout the season — after all, Doomsday is prompted by whatever goes down on November 22.

Nevertheless, it isn’t a group mission to stop Oswald or the so-called second shooter. Furthermore, the narrative deviation from the comic book series gives characters like Allison (Emmy Raver-Lampman) a richer (and timely) storyline.

Instead of landing in Dallas by mistake, the comic book sees the team purposefully travel back to this period. Ultimately, Five and Allison are blackmailed by the Commission into making sure Kennedy dies — Allison poses as Jackie Kennedy and Rumors him to death — and the shadowy Majestic 12 has nothing to do with this nefarious plot. A lot of the “Dallas” comic threads (particular Hazel and Cha-Cha) have already been depicted in Season 1; however, the deviations also reduce the amount of time leaning into this popular sci-fi historical hook.

“In some ways, this is such a new beginning for Allison. It was undeniable that she would either be confronted with, or dealing with, or in the middle of the civil rights movement, because Allison is a Black woman,” said Raver-Lampman to SYFY WIRE regarding the timeline shift. The tangential link to Kennedy doesn’t overwhelm Allison’s storyline of using her actual voice rather than her superpower that she believes has caused so much pain in the past. Her agency is restricted in the segregated South, but she exerts what little influence she has to make a difference within the civil rights movement. Rather than saving Kennedy, she is using activism to change the world for the better. As Diego tells Luther (Tom Hopper) in Episode 5, “everyone changes the world.” Powers or not, we all have the potential and ability to make an impact — even if it isn’t saving the president.

Love is a contributing factor to the choices these siblings make. Vanya has amnesia, so she is unaware of the events that are about to unfold until the pieces are filled in for her. Her priority is with Sissy (Marin Ireland) and her son Harlan (Justin Paul Kelly). It is only when reflexes kick in that she is even made aware of her unique abilities.

Unfortunately, Vanya is the root cause of this apocalypse when she inadvertently saves Kennedy after the FBI has used hallucinogenic drugs as a method of interrogation. Under these circumstances, her body goes into defense mode and this chain reaction prevents the shooting, which causes the Soviet-led attack Five witnesses. A suspicion that Vanya is a KGB agent results in her arrest and subsequent invasive questioning. Diego discovers her involvement before it’s too late — and his dream of saving Kennedy is thwarted by this very action that saves his sister (and the world).

“Why can’t you leave JFK alone?” Luther asks Diego in “Valhalla.” Diego’s response is to default to his hero status, but the subsequent light supper reunion with their father reveals the root of his desire is tied to his daddy issues — how very Freudian. “The last good man who will save us from our descent into corruption and conspiracy? This is a fantastic delusion,” Reginald (Colm Feore) observes. “The sad reality is that you’re a desperate man, tragically unaware of his own insignificance, desperately clinging to his own ineffectual reasoning.”

An eviscerating speech that reduces Diego to a stuttering and teary mess, which only makes him want to save Kennedy even more. He ends up in the psych ward because he tried to kill Oswald and he is still risking it all to play the hero he thinks he should be.

Conspiracy theories regarding their adopted father Reginald Hargreeves’ involvement are brought to light thanks to Hazel slipping the Frankel video footage into Five’s blazer pocket. A twist on the Zapruder 8mm film that caught the moment Kennedy was shot, which shows a man on the grassy knoll with an umbrella watching the events unfold. There actually was such a man with an open black umbrella on Dealey Plaza that day who has fueled certain theories — The X-Files depicted this person as an active figure in the conspiracy — however, the rainy day accessory was, in reality, a protest against Joe Kennedy. One reason Kennedy’s death and the surrounding theories are depicted more than other U.S. presidents who were assassinated — other than having occurred in living memory — is that it was caught on camera. These photographs and videos add to weight to weird factors like men with umbrellas open on a sunny day.

It is a striking image and one that perfectly fits with the sinister world of this show, but also its title. Incorporating their dad’s work into the overall Kennedy plot is an organic way for his adopted children to do what they could not when he was alive. In 1963 they can confront him about his mistreatment and mistakes, which might not lead to a happy ending but will afford some kind of closure. Unfortunately for them, their actions in Dallas drastically alter the present day; when they return to 2019, the Umbrella Academy is now the Sparrow Academy.

Five’s insistence that it could be something other than Kennedy is in part fueled by his more rational thought process than his brother, but he has also been in this exact spot before when he was sent by the Commission to make sure the assassination went ahead as scheduled. This was the one job Five failed to complete, which goes some way to explain why he is so concerned with messing up the timeline even more than it already is. His concern is the end of the world, not the president.

Some of the siblings have a tangential relationship to the Dallas main event, which sees Luther working for the soon-to-be killer of Lee Harvey Oswald, Jack Ruby (John Kapelos). Meanwhile, Klaus’ (Robert Sheehan) great love Dave (Calem MacDonald) enlists on November 23, 1963, and will die on the battlefield. Klaus uses his intimate knowledge of Dave’s family history (including a long military tradition) to prevent the death he has already witnessed. Klaus intervenes when Dave’s uncle is selling this vision, but all this does is cause his boyfriend of the future — and past — to sign up a few days earlier than he did. Some things cannot be prevented from coming to pass, no matter how hard a person wills it. It might be the president of the United States or a guy from Dallas, Texas, serving his country in the way he has been taught. Neither Diego nor Klaus saves the man they were desperately trying to.

Alternate histories continue to be on-trend because the allure of “What if?” on a large scale is a fruitful source of inspiration that also helps work through current global anxieties. The Cold War has become relevant again with recent political shifts, which is reflected in how TV shows and movies — including Stranger Things — are drawing from this multi-decade period. Science fiction has long reflected ruptures in society, with the threat of nuclear power leaving its mark from the 1950s with Godzilla to the apocalypse scenario of the recent German Netflix series Dark. There is a reason why Susan Sontag’s essay “The Imagination of Disaster” is just as relevant now as it was in 1964, when she wrote it. The Umbrella Academy joins the ranks of contemporary television utilizing a pivotal 20th-century event to explore themes that reflect the current landscape.

Ultimately, The Umbrella Academy is about a dysfunctional family that has to prevent the apocalypse (that they probably caused) while working through relationship issues that led them down this path. Season 2 was never about stopping the assassination; rather, confronting their father under the guise of his involvement is more pertinent to the narrative. Each sibling has an old demon to confront, whether it is lost love, how they use their power, or even the daddy issues that shape their actions. By using this historical-based time-travel trope as a leaping-off point, this season subverts expectations and demonstrates that while the conspiracy theories still rage, the end result on November 22, 1963, is still the same. Kennedy can’t be saved, but the Hargreeves siblings can still stop Doomsday — even if they have now accidentally written themselves out of their own narrative.